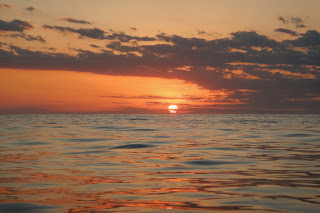 I’m training to cross the Sea of Cortez in a kayak this coming October. Each weekend I go out for a slightly longer paddle than the weekend before. Though I’m paddling towards a goal, I’m as much using the goal as a motivating excuse for getting out there as I am using these outings to prepare for a future event. Participating in the present moment is the real practice here.

This past weekend I paddled north from Loreto. It was an exploration as well as a training, since I haven’t paddled this coast in at least 15 years. Friday afternoon took me 13nm up the coast from Loreto to San Bruno, the mouth of a large estuary. Crossing the Gulf will entail a a few island hops followed by a long section, so I’m practicing doing a moderate day followed by a long one. That pattern also gives me a night of sleeping out under the stars, which is nourishment for the soul.

The best information I could find to carry on my deck regarding this coastline was a photocopy of the chart surveyed by the USS Narraganset in 1873 and 1875 which showed the mouth to an inlet clear and open. A lot can change in 145 years, especially in geologically volatile Baja, and especially at the mouth of an estuary!

It was getting on towards evening when I completed the stretch of mountainous coastline north of Isla Coronados and arrived in the vicinity of San Bruno. A crescent bay of a quarter mile’s width with a small hill on the northern point was the first break in the mountains. Waves from a 1-meter SE swell dumped dirty and powerful on the steep sand beach. Beyond the hill the coast was a long expanse of breakers, spilling more gently but without a clear channel and with the probability of partially submerged remains of trees scattered throughout. The tide was high and would be low in the morning when I would leave the beach around 4am and I did not relish the prospect of trying to find passage through an unfamiliar estuary mouth in the dark in the morning. So I chose the dumping breakers on the steep beach. I watched the waves crash for several long moments, then chose a location and paddled the last few strokes on the brown hump of a wave as it collapsed in gritty foam and shot up the beach.

I leapt out and anchored the kayak against the greedy pull of the retreating wave, but my feet slid back with the wave and the kayak in the gripless slope. The next wave filled the cockpit with a slurry of beach and sea and the ocean growled its malintent.

It wasn’t graceful, but I eventually managed to wrestle my kayak from the waves and deliver it to dry level beach. A pack of coyotes pulled at the carcass of a sea turtle next to the half-buried branches of a surf-sanded tree. A palapa and a motorless panga stood at the north end of the beach without signs of activity. I walked around my end of the beach, climbed a high sand dune to try to see the estuary but didn’t learn much.  The dune cast a lengthening shadow where I determined I’d make my bed. I also determined where I’d prefer to launch in the morning if the swell was still up, after watching the breakers for a while to memorize where the underwater rocks were.

The contents of the kayak went into 2 Ikea bags and I carried them to my camp. Moving the kayak was the next puzzle. I didn’t relish the idea of floating it to move it down the beach on account of the hungry breakers. Then it occurred to me that I had a set of wheels in the back hatch which I had used to get the kayak to the water in Loreto, and then forgotten about. I laughed with joy at my good fortune and giggled a little at my forgetfulness. I wheeled the kayak over to my camp, tied it up to the sturdy branches of a tree sticking out of the sand, and left the wheels on for convenience and flexibility in the morning.

A peanut butter and strawberry jam sandwich was my dinner as the light faded. On these trips I travel as light as possible. No stove, no cutting board, no kitchen. Boiled eggs, cans of tuna eaten with a spoon out of the can, granola bars, nuts, dried fruit, pre-made bean burritos and peanut butter sandwiches form my diet. I can eat them in the kayak.

I prepared for the morning, sealed up the kayak, and set out the ground tarp, the Therm-a-Rest, and a thin sheet, anchoring them all with rocks or sticks or water bottle against the breeze. I wrapped my pathetically small clothing drybag in a pillowcase. After removing from the drybag my sleeping t-shirt, a small towel to get the sand off my feet and Moose, it only contained a pair of socks, a warm hat, a spare shirt and a sarong. All together they didn’t make much of a pillow, but enough.

Jupiter appeared first. Then Saturn. Antares. Arcturus. Altair. Vega. Spica. Deneb. There is something comforting in recognizing and greeting these lights in the sky. The dimmer stars filled in. Scorpius. Big Dipper. Cygnus flew above me, the giant swan in the shape of a cross, wingtips raised. For a while the axis of the swan was the same as mine. As I stretched out my arms to reflect its shape, I thought of my dad. The cross: so central to his beliefs, to his being.

“Dad, what do you know now?” I asked the sky. ”Where is your spirit?” Just then a brilliant shooting star coursed across my view.

Whether it was the wind, or the anticipation of paddling 35nm the next day, or thoughts of mischievous coyotes, I had trouble falling asleep. But the night was beautiful. As the tide dropped sometimes waves would begin to break before they smashed the shore. They make a certain higher-pitched hiss when they break early. I picked up head up to look, and saw a bright glow. The bioluminescence was outstanding! From 60’ away, the breaking wave was the brightest thing in my little universe. Again and again, I would hear the hiss, look, and smile.

The Milky Way slowly pivoted. Scorpius crawled along the mountains. Cygnus flew a different direction. Finally I fell asleep, and woke suddenly out of a dream that everyone had packed and departed and I was left behind. It was 3:01, nine minutes before I’d set my alarm to go off, reasoning that I could get away with 10 more minutes sleep because 3am sounded too early to get up.

Because I had 9 minutes to spare, I took the luxury of slowly eating a boiled egg and half a sandwich while still sitting on my tarp, listening to the waves in the dark. Out to sea, the white light of a fishing boat shone. Another light appeared slightly above it, and I tried to make sense of the perspective. The new light was reddish. It started to grow. So did my smile of recognition. The crescent moon. The whole of it wasn’t yet up when it disappeared behind a cloud bank. Just a moment it had peeked out, and I had been sitting there looking, as if I’d been waiting for the show. Moments like this make it easy to feel alive when living outside. Alive and connected to some larger meaning or script.

I paddled north through a sea of tiny lights. Horizontal lines glowed and dissipated to my left, the breakers of the San Bruno estuary. I gave them a wide berth and paid close attention to the shape of the swells approaching from the right so I wouldn’t get caught out by the breaking of a bigger set. Occasionally the rounded cone of Isla Coronados caught my attention with a start, tricking my eye into thinking it was a large, dark wave. In the dark, I paddled by sight, but also by the sound of the breakers and the feel of the shape of the waves as they passed.

The moon cleared the low cloud bank and Venus followed shortly after. Over the next 2 hours I watched the slow-motion drama of Venus overtaking the moon. The moon moves eastward relative to the constellations to complete its path around the earth every 28 days. If you have the patience to watch it when it’s near a star or planet, in an hour you suspect there’s been some change, and 2 hours are enough to see for sure. The moon clearly rose first, and by sunrise, Venus had climbed higher than the moon, or more accurately, the moon had lagged behind Venus and the rest of the sky. What a privilege to have watched it, and all the more so from a kayak.

Even in the dark, it was hot enough to be sweating as I paddled. On my hourly break, I wanted to jump in the water to cool off and have a pee. Large creatures feed in the night. My awkward thrashing to return on top of the kayak will surely signal to them that I am lame, easy prey and fit to be removed from the gene pool. I am understandably nervous about jumping in the water at night. Just as I reached the hour, small manta rays called mobulas started leaping out of the water around me. Nobody knows for sure why they do it. Competing for a mate, shaking off parasites, just plain fun.  But they don’t do it to avoid predators. They gave me the confidence to do my own jumping.

Later, on my return, something large did follow me. Twice it made a large splash just behind my kayak. The second time I turned fast enough to see something brown in the water, like a sea lion, but it never breathed. Shortly after, something hit the back of my kayak from underwater hard enough to make the kayak shudder and push the partly deployed skeg up into the kayak. That hour I did not jump into the water.

The final approach to Loreto wasn’t nearly as spectacular as the previous week’s dolphin escort through bioluminescent nighttime waters, a special treat.  These last few hours were rough, in the 110-degree heat index of the August afternoon, but I made 35.5nm since morning, and 48.75nm overall. Next week we’ll shoot for 40nm nonstop and 55nm overall.