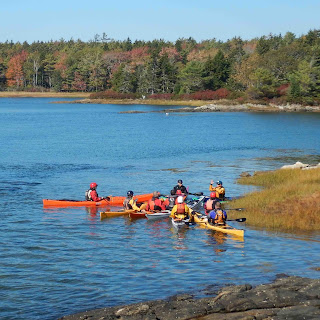 In September, I rototilled the garden with Kyleen, packed Baby Blue the Wondertruck with kayaks and gear, dropped Henrick off at the airport for his trip to Sweden, and headed south. I drove, Moose navigated.

We recalled to each other the stories of summer. How Henrick’s workshop grew daily from the ground up. Kyleen’s shipping container and the work to make it into a home. How Henrick and Kyleen worked together so well and the little farm family gelled. It was a summer to savor as the miles rolled by the window.

At the border we met up with Maddie. One day and $3000 later we picked up the legally imported kayaks at an unmarked house behind a restaurant and continued south to Surf Camp, then Loreto. Between unpacking and moving in, we made time to SUP the Loreto waterfront at sunrise, and to enjoy one sleepless night on Rattlesnake Beach watching the lunar eclipse then paddle to Danzante Island and back in the morning. Two days after arriving, I was on the bus for a 20 hour ride back to the border.

Next stop, Maine, where I learned how much more I have to learn about coaching. “Coaching” is a car I’ve been driving for nearly 2 decades. I know how to work it from the driver’s seat and how to negotiate traffic. In Maine, we looked under the hood. What makes the engine run? We kicked the tires and studied the tread. We asked ourselves what’s important for a young driver to know for their general competence; what’s useful for a depth of resourcefulness?

We were learning to develop coaches. The course was BCUAB Tutor Training and Level 1 and Level 2 Orientation. For the first time I learned about the Kolb model of experiential learning, which is fundamental in education.

My coaching has been largely seat of the pants. Gut sense and logic. How is the flow going and is it time to change the pace? Can they handle one more challenge? What worked well last time? What can I improve? The idea of progressions and covering the learning preferences of visual, auditory, and kinesthetic have long been incorporated. The exciting thing about this course was that there are so many other lenses through which to look at the learning and coaching process. Binoculars, microscopes, telescopes, infrared, x-ray… Then the challenge is to identify what is the most important for beginning coaches, without overwhelming them with theory. Paddling is a physical activity after all. John Carmody, Steve Maynard, Todd Wright, Bonnie Perry, and I put our heads together, guided by Steve MacDonald.

Maine was fall colors, stone houses, and dining together with the clink of ideas on the plate. Ideas surging cold and salty over rocks with students riding on them.

Next stop, Georgia. White sand beaches and screened-in porches, and spray lifting off the clash of waves in Tybee Islands’ triangle in the wind. Oysters on the table pried open with fingers and savored with the long southern vowels of conversation.

I cut Georgia one day short for an impulsive detour to the Bahamas. Travel, while exciting, can leave one homesick. Not for the house particularly, but for the comfort of familiar companions. Henrick was a stone’s throw off the Florida coast, closer than we would be in a long time, especially since we didn’t actually know when or where the next visit would be. His schedule had him welding and pipefitting from 8am to 8pm every day until the project was complete, no weekends. But he still had 12 night hours! He was just as enthusiastic as I at the thought of a 2-night visit.

Maybe I don’t have to say how refreshing it is to just hold each other and tell stories of our recent days. To be enveloped in acceptance and tenderness. At gatherings of people I often feel like a bit of a social misfit. If I’m there to coach, I do my best and like to think I do a good job. I enjoy that. But the insecure little girl inside struggles in social situations. After 3 weeks of social situations… Henrick, for his part, wasn’t terribly inspired by rebuilding the laundry facilities on the humbly named cruise ship “Celebrity Infinity”. We were each other’s salve, and each other’s celebration.

There’s a romance to sailing across the Pacific, to meeting up on various continents and islands when we can. In the spirit of it, a 2-night fling in the Bahamas just fit perfectly! The second night Henrick’s supervisor gave him 4 hours off. We celebrated at Lucaya harbor with Matterhorns of pina colada, live music, and even a little dancing. What mattered most, though, was just being in each other’s company. I’m still smiling. 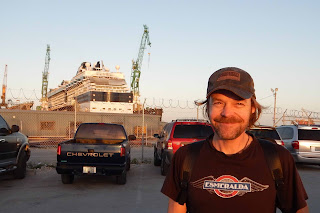