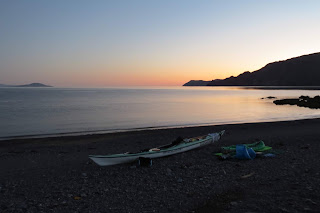 Sometimes you just need to go. Get outside. Sleep under the stars. Remember what all the computer work is for.

So I did. At about 7:30 in the evening I shut the half-done projects into my laptop, their cries for attention muffled by the closing of the lid. I put the kayak on wheels and loaded the sleeping essentials into an Ikea bag, along with a few granola bars, some nuts, and dried fruit, and headed out the driveway. Locked the gate behind me, and pulled my kayak down the middle of the street, as you do in Loreto.

I love living in Loreto, a block from the water. The hotter it gets into the summer, the earlier I’m going paddling or running each day. Now I go before sunrise, and even then often drenched in sweat. It’s a little fresher after the rain this week, Loreto’s first rain in 8 months.

The sun is setting over the mountains now, casting a last red glow on Isla del Carmen 9 nm to the east. My destination. I’ve become comfortable finding more familiar beaches by ear, bioluminescence and skyline silhouette in the starlight. But this part of the island I travel less often, and only once before have I paddled directly from Loreto to there. I’m not exactly sure which peak to aim for. So I guestimate a little to the south and know there are several options to my left once I reach the island.

But I’ve a ways to go. I empty the Ikea bag into my kayak, and pack the wheels into the hatch. I push off the beach and become amphibian. A live performer is torturing some chords at the waterfront Hotel Oasis where guests sit at outdoor tables draped in white linen. It’s all-you-can-eat clam and oyster night. The sounds and lights of Loreto follow me into the dusk.

Swells are coming from both north and south, almost opposite each other, making for a syncopated rising and falling as I paddle less by sight and more by feel. A light headwind keeps me cool.

Isla del Carmen turns blue, then black. I notice a shadow moving back and forth on the deck of my kayak. A crescent moon hangs over my shoulder, bright enough to cast a shadow. A couple of planets keep it company. Stars come out, lighthouses blink in the distance. The Southern Cross slowly cartwheels back below the horizon.

I hear the splashes of fish on occasion, but these are bigger, and more persistent, and coming from all around, almost like the churning water of a tide race. I stop paddling to listen. The staccato exhalations of dolphins accompanies the splashes. I see one dark crescent break the water beside my kayak. They are behind, in front, and many to the right. I alternate between paddling and listening. Between excitement and gratitude, my smile another beaming crescent in the night. How can the presence of other beings bring such a flood of joy?

Big splash to the rear. I turn to see another leaping high in the moonlight. “Whoo-hoo! You are beautiful!” I declare.

I wonder how they know exactly where the surface of the water is to take a breath in the dark on a wavy night. I wonder what they see of stars. I wonder if they can see anything through the thick brilliance of the bioluminescence streaming past their faces. My paddle sends galaxies spinning out beside my wake. I wonder what the dolphins know of galaxies.

I’m about halfway, a little over an hour into the crossing. Isla Danzante’s distant blink and the silhouetted cone of Isla Coronados are on either shoulder. My path is crossing the line between them.

I will hear the dolphins off and on for the rest of the journey, until I also hear waves breaking on the rocks of Carmen.

There I am alone. I feel alone. There is a tall rocky point in front of me. Not a good place to sleep. It’s 10:30pm. I know there are reefs along this side of the island, so I keep a cautious distance from the point as I head north, listening.

I have a headlamp hanging ready but turned off around my neck. It’s not strong enough to cut the humid air all the way to the shore. I have a GPS in my day hatch, with a familiar beach already programmed. It felt like the responsible thing to do before I left. But I don’t need it.

The waves change tone. The air smells slightly earthier. I head closer. This beach will do. I pull up the kayak, float myself for a bit in the sparkling water, then make my bed as the moon sets behind the mountains. The mountains are invisible, another darkness in the darkness. The moon disappears tail first into the darkness without touching the lit horizon of Loreto.

I lie down beside my kayak and look at the clouds of light swirling half-mixed with the darkness as the Milky Way rolls off Scorpius’ tail just above the peaks of Carmen. I look until my eyes can’t look any more, and then I dream to the sounds of water.