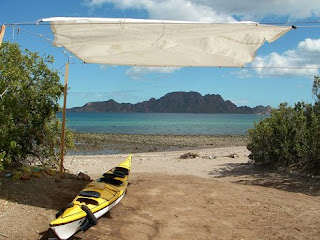 On my way into Rattlesnake Beach late yesterday afternoon, I saw an owl perched on the top of a sturdy mesquite bush. At first I wondered it if was a plastic bag caught up there in the wind, then it turned. Its ear tufts blew a bit sideways and it wore a rather disheveled look on its face. Its head swiveled as it followed my slow progress along the bumpy dirt road.

I’ve been feeling a bit like that owl lately—a bit windblown and swivel-headed as events and milestones and old blue Ford pickups keep passing me by.

After a month and a half in Australia, I checked in with business partners in Washington, and stopped at the hospital for a routine post-cancer check-up while I was there. The 3-day Turbo Business Meeting was as productive as it was random and fortuitous. Mark, co-owner and manager for Columbia River Kayaking, and I often discuss things while driving errands, and one takes notes. This year’s meeting went a step further. On the way home from the airport, I bought a used truck, the kind I’ve been seeking for about a year. It was owned by a kayak club friend, and Mark alerted me to its existence just 7 hours before during my layover in the LA airport.

The doctor’s visit was historical. I sometimes don’t keep track of dates very well (just ask my family about birthdays!), so it was a surprise when I went to leave the post-MRI and mammogram consultation, and my doctor said that had been my 5-year checkup. Statistically, the chance of recurring breast cancer is so minimal if you’re still clear after 5 years, that follow-up care ceases, except for the routine mammogram that we should all get. I was clear!

My doctor said I am now just like any other normal 42-year-old woman, and turned me loose on the world. I felt a strange mix of thankfulness, awe, freedom, and denial, as I walked out the hospital doors for the last time. Denial that 5 years could have gone so fast! I’ve heard that the years start to do that at a certain point, so I must be getting to that accelerating age. I have some people to thank for the smoothness of those 5 years: in particular, my surgeon Dr Katterhagen who takes the time to listen to my concerns and explain how things are, Carmen the nurse who greets me with the biggest smile, and Kelly the most amazing arranger of schedules and insurance coverage. You gals have gone the extra mile and beyond! Thank you!!!

I don’t know what any “normal” 42-year old would do the next day, but I flew to my other home, a patch of sand under the Giganta mountains and the full moon just south of Loreto, Mexico. I moved back in, which consisted of setting up the dusty old Coleman stove and making 3 pieces of French toast for dinner by the light of my headlamp. Then I went for a paddle to nowhere in particular. Just for some perspective on the shadowy mountains and the bonfires of neighbors down the beach. I almost ran over a sea lion sleeping with his flipper in the air. Every few seconds he lifted his whiskered nose for a breath, then let it sink. He didn’t change at all as I glided by. Moments later a shadowy diamond shape passed under me, flapping gently. A ray. Close to shore, the moon shadow of my kayak followed along the bottom, and laughter of my neighbors carried out into the warm night. Amidst the swirling passage of events, it’s moments like this when time stops and one can hear the music of life’s soundtrack in the background.
Posted by Ginni Callahan at Monday, February 28, 2011