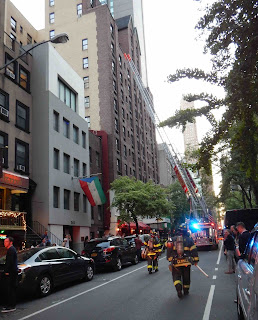 Five minutes after we returned to the hotel, Henrick and I smelled smoke. We were weary from walking all day: 3 hours in the World Trade Center observatory and memorial and 3 more hours walking back from there via the High Line and busy streets to Pod 51 Hotel, on 51st Street. We’d been refreshed by a good dinner and were ready to put our feet up and relax.

I thought the smoke came from our air conditioner, so I turned it off and opened the window to stick my head out. Below us was a restaurant and their back door stood open just under our window. Smoke drifted out. Were they smoking something? It didn’t smell very tasty. There were sirens outside, but this is New York City. Sirens all the time. They couldn’t be for us.

Henrick stepped out of the bathroom and into his shoes to investigate, but came right back. The hall was full of smoke and the fire alarm just started.

An announcement cut through the beeping, “This is not an emergency, but please evacuate the hotel using the stairways.”

Most of our possessions were already in our small day-packs. We’d traveled light on this 3-day honeymoon in the city. We shoved the rest into the packs in just a few seconds. I put my shoes back on, grabbed my headlamp (always the prepared camper), and we slunk low and quickly through the dark smoky hallway to the stairs, with shirts over our mouths, and eyes squinted. Others were descending as well. The stairs were well-lit and not so smoky.

Black-suited firemen dragged a hose into the entrance as we filed out. They were headed through a door to the adjoining Salvation Burger restaurant. It was about 8pm with the last daylight in the sky.

Red fire trucks parked in the street with their lights flashing. Firemen strode purposefully about. Police and fire vehicles blocked both ends of the street with their multi-colored light shows. The nearest truck extended a ladder up the front of the building but nobody went up, and nobody leaned out waving handkerchiefs from windows above. Smoke began wafting out of an 8th floor window. People gathered in the street to look.

Henrick and I chatted with a young Brazilian woman Natalia from the apartment across the street as we watched the action. More trucks arrived. Two firemen dragged a litter of first aid supplies and implements of destruction up the street. More yellow suits strode past carrying long crowbars and axes.

A friend of Natalia joined us and pointed out the owner of the burger shop, a woman in a white chef shirt. She was enjoying great success and notoriety in the city with her restaurants, of which this was the latest, open just 2 months. Kitchen fires are fairly common in the industry, according to our local informants. Natalia’s friend had lost her home and belongings to a kitchen fire in the restaurant below her apartment.

Firemen’s names reflected in yellow on the tail of their long shirts, a design modification since 9-1-1. “All these trucks may seem like an over-reaction, but this is what they do now,” she said. “They’re prepared for anything.” Steel-framed gurneys loaded with first aid supplies stood ready in the street attended by yellow-suited EMS responders.

After about an hour, the excitement slowed down. The smoke had quit. Hoses were being dragged back out and folded. The ladder lowered. The white-coated kitchen staff was herded away by a tall fellow, perhaps to be grilled. The owner still chatted with a tight knot of people near the restaurant. Our new friends and other spectators wandered off.

Cleanup looked like it would take a while for the fire crew, and not many were actually working on it. Henrick and I headed for someplace to sit, and the pub a few doors down looked inviting. The emergency lights flashed through the pub windows giving it a reddish disco feel. We nursed our beers for about another hour until the disco ended.

The street was still blocked, and a crowd assembled around the hotel, which was blocked and attended by an officer. A couple waiting said they’d been informed that there would be rooms arranged for everyone, and that they would get more info soon. Who knew when “soon” would be.

With everything we had on our backs and no worries, we wandered off in the other direction to find another pub. Might as well enjoy the evening! We sipped our beverages peacefully on sidewalk chairs between the noisy bar and the busy street, discussing life’s endless topics for another hour and joking about our hot honeymoon.

The last flashing lights quietly extinguished and drove away. Taxis began entering our street. The hotel lobby was still bustling when we returned, so we went up the stairs to see our room. In the hall there were some chunks of drywall and debris. One door near ours had been broken into. Other doors stood open, including ours. The room next to ours had a hole smashed in the wall. Our AC unit had been pulled from the window and lay askew on the floor. The room smelled slightly smoky, but was otherwise quite liveable. We decided we could stay, but would ask for a discount.

“What’s your room?” asked the clerk.

“We have a room for you in another hotel a few blocks away and the taxi fare is covered,” said the clerk.

We were impressed. Considering what Henrick and I had just discussed, though, this seemed more dramatic than necessary. I said, “We’ve just been up to see the room, and, if it’s permitted, we could stay there. The AC is on the floor and it smells a little smoky, but not too bad, and we can step over the AC. We were just going to ask for something of a discount.” I didn’t say it was to cover the bar tab while we’d waited, but that’s the amount I was thinking.

The clerk excused himself and ducked into an office. He returned to double check with us that it really would be ok, and then tell us that we could have the night for free. What’s not to like? That was worth several times more than what I’d asked for. There was a bagel store around the corner that I had my eyes on for the morning’s breakfast, and we didn’t feel like relocating, really. Believe it or not, we can both be homebodies, and we’d bonded with our tiny room whose closet of a bathroom reminded us of an apartment we’d shared for a month in Orebro, Sweden. We returned happy to our little nest.

After the fire, the restaurant would obviously be closed for a while, and the hotel had some repairs to do, but nobody had been hurt. 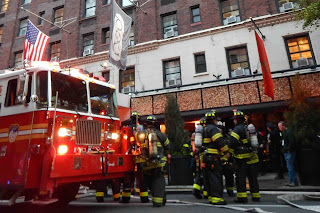