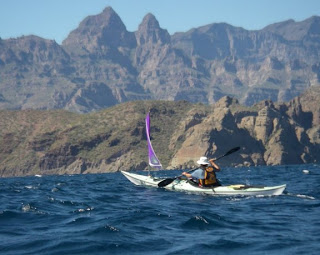 Spray lifts gracefully from the wavetops, catches the sun, and obliterates Danzante Island from view. In front of me I can see another gust coming with white spray bright in front of the shadowed hills of Puerto Escondido. When the gust hits I gasp to inhale; it is going by too fast to breathe it. I force myself to relax and get some air. I’ll need that air because I’m paddling fairly hard, and might want some reserve if I capsize again.

Me? I’m just out here playing. Forecasters had predicted 30kts, and I wanted to test my Flat Earth kayak sail, my experiments at rigging, and my own skill. I stay between Rattlesnake beach and the yachts in the harbor because it’s rougher than I expected. It’s good to have a challenge every once in a while.

If I paddle while sailing, I can tack to about 45 degrees into the wind and make exciting headway. A gust pushes the mast over beyond 45 degrees, tipping the kayak with it. I’m bracing on the downwind side, but momentum slows as the mast flattens, and with it goes the support of my brace. The gust lasts longer than I do, and I finally relent and lie down in the water. Upwind will be on my left, so I prepare to roll up there, pausing to release the sheet so I can roll up without the resistance of the sail. I’ve practiced this before.

The roll is no problem. The mast falls as I come up, probably because the rigging stretches a little with the pressure of the water during the roll. I gather the mast and sail onto the deck and pop one quick strap on it. I reorient into the wind and pull the mast back up. After a few more tacks I turn to ride the wind. Wheeeeee! This much fun should be illegal! I spy some friends on the beach, looking windblown but fascinated. Before I pass them, I try dropping the mast (and sail because they are connected). I’m on a speedy downwind run, and the mast refuses to come down. Is it the zip tie on the line caught in the jam cleat, or the pressure of the wind? I turn a little sideways, the gust passes, and I get the mast down. Note to self to review the system again on this issue.

Klaus is effervescent. “This is amazing! It’s a whole new sport!” He’s a kayaker and an ultralight experimental aircraft pilot and general adventurer. I am excited too, on the verge of jumping up and down, but I’m still in my kayak.

I decide to try to get into the port before the cruiser’s net on the radio. I have about 30 minutes. Gusts are still whiting out the channel that funnels the wind like a fire hose. No sail this time, I work my way upwind along the shore. Legs, core, rhythm.

Momentum, trim forward, edge. Start the turn. I regain the direction. This happens several times. Bit by bit, I experiment with paddling through the gusts, edging into the wind and trimming forward when I start to get turned. Between the gusts I can relax my hands, but during the gusts, the paddle wants to do funny things. I keep a vertical stroke into the wind because it is still more efficient and easier for my body to power the stroke. And I try hard to breathe normally.

Eventually I get to the lee of Iron Maiden and pant for a moment. She has stabilizers out and isn’t swinging around much. Using her wind shadow, I gain momentum, then shoot my Explorer past her to cross the gusty channel. It’s not as bad as I expect. I even try putting the sail up halfway across. Maybe it’s worse than I thought, or the rigging has stretched too much, because eventually the mast blows over and splashes into the water. I brace the paddle under my PFD and hold it with one hand while gathering the sail and mast and stowing them. The sail itself is taking a beating at my inexperience and enthusiasm, but it's sturdy. I’ll do a minor rigging adjustment when I get to my friend Richard’s boat.

He’s anchored at the back of the harbor. All classes of boats are swinging wildly at their moorings and I give them a wide berth. Also because gusts come up and blow me sideways a good distance on short notice. I often run classes in here in calmer weather to practice maneuvering around the yachts. This is more like running drunk through a forest where the trees are dancing about unpredictably.

On the radio, one yachter reports wind of 25kts, and Richard and I both shake our heads. He was here for the 50kt blow last year and says that this wind isn’t that bad, but its damn well over 25 on the gusts! He doesn’t have an anemometer on board, but several others do. Someone else reports gusts of 40kts coming through. This is the one we want to believe.

I power up on half a Snickers bar, adjust the rigging, and head for the beach. Halfway across the channel I finally have the guts to try the sail again. Wow! This is living!

I hang on a stern rudder on the upwind side, and play with the angle of the blade to control the direction. I’m moving right along, and then a gust hits. The kayak jumps to catch up and now we’re flying! The wind doesn’t feel very strong at all when you’re flying with it! I don’t have the skeg down as I some times have done in lighter winds because I want to have the most response possible when I steer with my blade and the edges of the kayak. It’s really more like surfing where using a skeg would not be desirable.

To catch a wave is no work at all. I just look at it, think “yes!” and there I am. The boat has a good line along a wave and a solid feel in the sail, and I can’t help myself--I raise my paddle over my head and whoop with joy!

I’m not straight downwind since that would risk the sail jibing on me, or flipping sides violently, which is hard on the equipment and the balance of the paddler. But I want to try jibing on purpose to angle away from the beach before it gets too close. I pull in the sheet so the sail is in the shortest line possible, and carefully redirect my bow to the left. Bam! The wind shoves the sail to the other side and I let the sheet out a bit, perhaps not enough. I don’t think I even got one good run in that direction before a big gust catches me, and I see the mast starting to give. I take a hand off the paddle to pull up the mast better, still bracing with one hand and my elbow on the paddle. The gust pushes harder and I give in.

Same drill, but when I come up, the mast has fallen frontwards, in the hazard zone where I can’t reach it from the cockpit. It’s not supposed to be able to do that. I turn upwind, which is easy with a little momentum because I had a giant anchor hanging off my bow. The sail drifts back to me as I move forward and I can see where one metal shroud has broken where I tied a knot in it to tighten it. That break would allow the mast to fall forward. That break would also make sailing kind of impossible. So I surf back to my beach, still quite glowing.

What I do know is that I have a lot to learn and practice about kayak sailing, and also that it is so unbelievably much fun!
Posted by Ginni Callahan at Wednesday, December 01, 2010