The No-Garbage Theory of Chicken Spirits 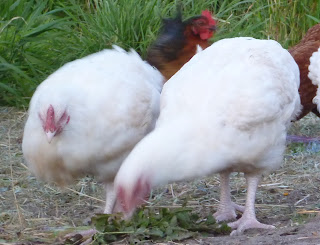 Nothing disappears. I looked into the yellow and black eye of my chicken as she gasped, and the presence departed from that eye. Where did that breath just go?

I read somewhere of “primitive” cultures without the concept of trash. Where resources are a closed system.

In our lives, garbage goes to that magic place called “away” and new things keep appearing on the shelves. But that’s an illusion. Everything goes somewhere, everything comes from somewhere.

So where does a chicken’s spirit go? Or it’s breath, if you don’t want to grant chickens a spirit. There is something in there that is alive, then it isn’t.

I had a hard time killing this chicken. She had chickenality, which is personality with feathers. But she was a meat bird, I rationalized, of a hybrid breed that will usually die of a heart attack if let live much past its prime butchering age. Besides, somebody was eating the laying hens’ eggs, and that behavior is not to be tolerated in the coop. It was just her time to go.

I cradled her in my arm as she looked around and told her I’d love to meet her again someday, when she’s not the chicken and I'm not the farmer; when we’re more equals. And then I stuffed her gently but firmly into a bucket, pulled her head through a hole in the bottom, and cut her jugular.

I held her head down so she wouldn’t flop out of the bucket as she expired. I apologized, and I sobbed. A chicken takes a long time to completely expire. The eye is lucid, then it blinks. It fades, then returns briefly. The body jerks. One has eons to think and to feel while standing there, knife in one hand, chicken in the other, burgundy blood dripping.

If spirits “come into this world” and go out of it, where is the spirit warehouse?

There was an energy that was trotting around, pecking, scratching, flapping. Now it hangs limp in my hand. Physics gives us the “law of conservation of energy” which says that nothing disappears. That chicken’s breath has gone somewhere. The energy in the flesh has not gone anywhere yet, though it will eventually become part of three things: my body, my activity, and my composting toilet fodder. Poop will become dirt, and then nutrients taken up in a tree. My body, too, will eventually become dirt, taken up by plants. My activity makes body heat and moves resources. So our legacy is dirt, and the things we move. Plus spirit.

One can follow nutrients around. But spirits? Can they appear, like new toys on the shelf, and go, like garbage hauled off in the truck? Then where is the factory, and where is the dump? Or is it the recycling plant? There must be a circle of understanding big enough to encompass the resource flow of spirits.

If rattlesnakes can register the heat left in a mouse’s footprint, and physics can split atoms, should we not be able to measure a spirit and follow its trail as it departs into thin air? Maybe spirit is air itself. It animates a body, and then it stops entering it, and takes that heat back into itself. Is God in the air? Is God the air itself? Is God the Warehouse of spirits? Or is God the warehouse Manager? Or is God just a word for things we can’t measure but need to believe in?

The next steps made the chicken less resemble the entertaining creature I knew, and more resemble food. Scalding, plucking, removing head and feet. Eviscerating. During the final step, I noticed that she was developing chicken testicles inside that body. Sorry, little rooster. Life is full of surprises.