Driving by Emotion on a Rational Grid 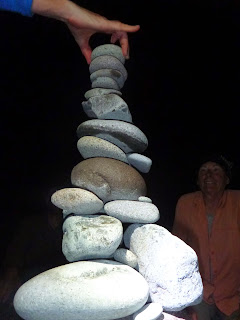 “We’re not going into business with you because we won’t make any money,” a wise and slightly greedy business person once said to me.

Business should be planned, structured. Numbers crunched into place. But I do what I do for a living because I love it.

Is this an infraction? I’ve been driving by emotion on a logical grid. I’ve never completed any market research or followed a 5-year plan. There are so many variables that I don’t really know how, and things keep changing about 1.5 years into the Plan.

But I do know that if somebody comes along who is passionate about an idea complimentary to what I’m passionate about, it can go a long way and be an enjoyable ride. Somehow, I’m still eating. Still camping out under the stars. Still playing on the sea. Still traveling, even too much sometimes. Still working with amazing people. Still finding myself completely blown away at where this circuitous route has led. Awash in thankfulness at the peaceful end of another day.

A waxing moon just past half-full centers itself between canyon walls. Lightening blinks on the eastern horizon. Waves pound and grind beach pebbles into sand.
Jim plays the harmonica. Santi accompanies on well-tuned kayak bungees and some kitchen equipment.

We celebrate Sarah’s birthday with chocolate brownies from the Dutch oven, and start a game of stacking rocks. Balancing a tower. Building bridges. Constructing castles. Two leftover birthday candles grace the turrets, but blow out in the breeze, their horizontal flames flickering for a moment like flags.

People drift away. I walk down a row of kayaks, colorful in the moonlight, checking that everything is secure. Cocoons glow down the beach, campers bedding down. Near the kitchen, the guides and I make our nests. After 9 years, Marcos’ Big Agnes pad has finally outlived the repairable stage. “Marcos, why does your tarp have a valve?” asks Santi. And we all giggle for a bit.

Loreto to La Paz. My first trip of the season. Marcos’ first trip with Sea Kayak Baja Mexico. The adventures don’t end when we get off the water.

Ten days of kayaking south. Five hours driving back. Fifteen minutes from the house, the clutch breaks. Marcos inserts a socket in place of the broken plastic, and limps it home. The next day, the mechanic across the street modifies a part he finds in town, replaces the broken one for about $25, and we’re shifting again. There are just some things that flow in Mexico. Living by heart, creativity, and hard work is one.