We Crossed an Ocean 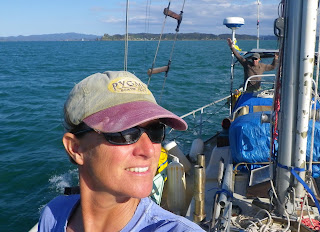 We crossed an ocean. It really just hit me today. Misty’s sails are down and folded under a tarp on the deck. We’re motoring towards the ramp where we’ll take her out of the water tomorrow.

We’re headed into the wind and little whitecaps, but if I look back, the sea appears calm. The backs of waves always look smoother than their faces. So it is with journeys.

Each moment is just a moment, wherever you are, whatever you’re doing. Just one day you look back and you’ve crossed an ocean. Moments of tension or struggle flatten as they recede into the broader story.

Was I really there? There’s an unreality to it. But it’s a valid question. WAS I really there—in each moment, present? Am I really here? Is contemplation a removal or a deepening? If I were truly, deeply here, would I be writing about it, or just breathing it?

Short sleeves in the afternoon sun. Glint off Misty’s bare boom. Wind in our faces. New Zealand flag whips its tattered end in a sky only 2 shades a lighter blue. Motor growls deeply. “Mutiny” the dinghy bounces in our wake. White sails tilt across the horizon near and far. Two people fish from a tiny motor boat as it bounces radically in the waves. Forested hills and bright grassy slopes pass slowly. Paihia. Russell. Whatiangi .The birthplace of English-speaking New Zealand.

Cape Brett and Cape Wiwiki lie hazy in the distance. This is the bay we entered after crossing from Tonga. It was a clean slate then. Now it’s crisscrossed with memories like the tracks on our GPS.

We crossed an ocean. It’s an emotional realization.

At the same time, we built a relationship. Hands down, the harder of the two. At least in crossing, you know what direction you ought to go most of the time, and you have a map, a GPS, or a nautical chart. Still, each moment is only a moment, just the same. Only looking back do you see the sum of what you’ve built, and hold it even closer to the heart.

There’s something profound in what it means to have a boat. Something about freedom, and the cost of exercising that freedom. It’s not a fancy freedom, but it did get us from one continent to another. 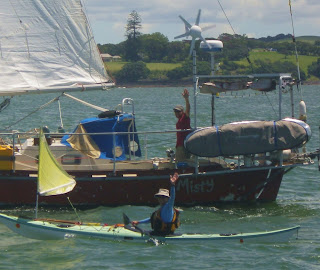 It’s a different dimension, living on the sea. A calendar with elements of wind, tide, climate, and swell, and less attention to hours, minutes, and appointments. It’s perspective. Seeing the land as little green punctuations in a vast watery openness, instead of seeing the sea as a fringe of blue between the beach and the horizon. Living at the mercy of the weather, even on anchor and in the middle of the night.

I take a final dive in for a bath at sunset in Kerikeri Inlet. El Condor Pasa plays on the stereo, on flute and native instruments, nostalgic in the fading light. The New Zealand waters test one’s resolve for bathing, to be sure. Henrick is loosening the rigging for tomorrow’s haul-out and removal of the mast. He says he feels sad, too. The end of a year of travel together, and a journey we’ve been preparing pretty much since we met almost 4 years ago. We will depart separately for who knows how long or where we’ll next see each other. If I think about it I can’t keep from crying.

“Goodbye My Lover” sings James Blunt. Little things to do for tomorrow. Dinner. They keep me sane right now.

End of a trip. End of our year. Like the end of anything, a life. What did we do with it? Took our floating home across an ocean. How does that fit into the big picture of anything? Only Time has the clues.