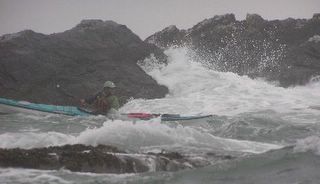 Where's the next wave? Ginni plays in Penrhyn Mawr, in Wales.

The trip began with pure adventure. Even though Dutch BCU coach Axel well outranks me in skills and coaching certifications, I have more experience with Pacific Ocean swell. The importance of this became vividly clear to me when Axel and a Pacific Ocean set found themselves sharing a long archway. The 17’plastic boat he was paddling through the 16’ wide tunnel tossed about like a toy. The yellow bow aimed skyward, then the hull appeared (that would be the bottom), then the whole boat spanned the tunnel without touching the water below it, then just white water, then the bow moving in an undirected, unmanned kind of way, then the deck of the captainless boat. Hmmm, one says to oneself, this is not a promising start to a journey.

When the set subsided, I paddled my little wooden boat back through the tunnel, clipped my short tow on the wallowing banana, and dragged it out the far end to Axel, who was unhurt, but worried about the boat, which was mine. I dumped it out, he climbed in, and we went to a beach nearby to inspect.

Just a flesh wound. A few scrapes in the bow and stern, a few pieces of rock embedded, a little bend in the deck, a little gap between the rim of the day hatch and the deck easily repairable with duct tape and a float bag for security. Some dry clothes for Axel, a few moments of heart rate reduction, and we were back on the water. This became the event that we got the most conversational mileage out of over the next few days. We decided it was a good 5-star rescue precipitated by poor 5-star judgment. Thereafter we conscientiously exercised good 5* judgment.

The Mendocino coast is the domain of rock arches, including one 4-way with the intersection open to the sky. We explored and played, and surfed a little bit in a protected cove. One set wave came in when I was waiting outside the break and Axel was heading out through the impact zone. He said something I didn’t quite catch (perhaps it was in Dutch), and leaned on his paddle with long arms. The wave jacked up and crested, obscuring my view of Axel in the bent banana. Suddenly out the back of the wave, through the green middle of it, a yellow projectile launched, with a yellow-clad passenger bent over the middle and white streams of water flying off. For a moment it was completely airborne in a snapshot of high drama.

After a quick tourist visit to the Redwoods, we and found ourselves on the legendary southern OR coast. This is the secret frolicking ground of sea stacks and offshore rocks. Mazes of them. Playgrounds of them. We used them to full advantage, sometimes riding between as a swell compressed its way through. We stumbled upon sleeping seals, which look like kelp until you’re too close. They float vertically, noses out of the water, bobbing on the swell with eyes closed and nostrils rhythmically flaring and relaxing.

The rest of the Oregon coast was unfriendly as we drove up it, with 13’ swell and high wind. Just across the Columbia in Washington, however, we found the holy grail of sea kayak surfing spots inside the mouth of the river, and covered an awful lot of mileage in 200-yard increments.

Now I’m home, cozying up to computer work and a propane heater, or out puttering in the garden in the short sun of winter, or walking the woods in bright clothes so I’m not mistaken for an elk.