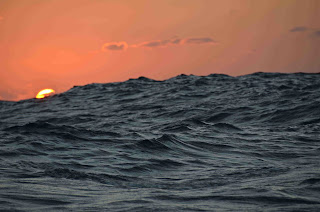 The 150-mile wide eddyline between northern hemi weather patterns and southern is called the ITCZ (Inter-tropical Convergence Zone), and last night we found it.


The wind died. The sea was a swell stew, thick with lumps going every which way. Little sailboat Misty twisted and bucked. We started the engine and headed south.


Squalls punctuated the horizon. Fuzzy sea beneath an approaching cloud. Rain sheeted down and we quickly stripped naked to let it cool and rinse our sticky bodies. The reefed mainsail became a spigot, filling my mug in seconds with rainwater infused with the funk of 3 years in a Guaymas boatyard. We left the desalinator running with its shy voice like a windshield wiper hiding below the engine’s bass drone.


Lightning astern, dark skies ahead. We took turns hand-steering through the night. Dawn put on its orange rain suit too, then quickly changed to grey.


The ITCZ is where waves and clouds convene. An inter-faith revival. Clouds of every level and denomination brush fingertips. Waves from all directions merge and pass through each other. The swells bring news of storms and sailors down, births of whales, the taste of coastlines; of glaciers calving, ice flows shifting, and the progress of undersea volcanoes.


Clouds talk of convection currents and winds aloft, the high-altitude migration of impossibly tiny things, the shine of cities on their bellies and the feel of coal smoke between their toes. They gossip of Skamokawa, where all clouds pass to drop a calling card or two. They whisper rumors of deserts seldom seen.


The convention is a masterpiece in greys and whites and subtle steely blues. Dark on light on dark, complex and ever shifting. Sea and sky fill the giant circle of canvas. Swells and clouds, clouds and swells, they feed each other, and the long-winged sea birds hang in between. 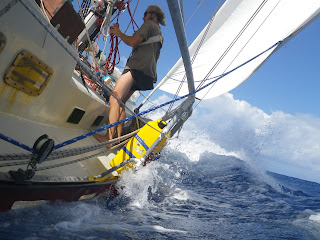 April 29, 2012
On April 24, Henrick and I left the lights of Cabo San Lucas, Mexico, in our tortured wake and headed for the Marquesas. The 2,700NM crossing should take about a month. It’s the first Pacific crossing for both of us, though Misty is a veteran and bounces us rambunctiously along. Since catching the trade winds, fifteen knots of wind and 8-9’ seas have been the average, on our tail, which is good for progress but makes Misty roll gunnel to gunnel, about 60 degrees, in less than 2 seconds per side, day and night.

First, there’s rolling, the side to side rocking around a longitudinal axis. The 360-degree kayak roll is the ultimate example. Pitching is forward and back over a horizontal axis, where pitch-poling is an extreme case. Yawing is a side to side pivot around a vertical axis, such as getting broached in a wave. There’s also bobbing, the up and down that leaves you weightless with your paddle clutching air, or very heavy and shoulder deep in the wave next to you. If you’ve ever paddled in clapotis, you know what I mean.

Misty is just another closed-decked, double-ended, seagoing vessel, but big enough to fit two Romany sea kayaks on the wave-pounded deck. She does all of these movements in eternally varying combinations, constantly. I retreat to the forepeak berth to close my eyes. Now I know what a vegetable in feels like in the front hatch of my kayak, and I understand why some come out looking as they do.

If sailing is romantic, then wearing a floppy nylon spray skirt to a formal event is fashionable. Unless of course you like haggard faces and matted hair, vomit-breath, the baggy orange Grundens look, and sleeping in separate sea berths so you don’t clobber each other with the violent movements of the boat.

Far beyond romance, though, long distance blue water sailing is the ultimate teamwork. The common goal of arriving alive unites your efforts. You become passionate about each other’s safety. Just when you think you’ve given all the energy you have, the whisker pole breaks, or the wind rises, and you find some more energy somewhere to deal with it. You see your partner pushing himself past normal endurance, and you are inspired to ease his comfort, take longer watches to let him sleep, let him know how much you appreciate him. During the intensity, when the sea is challenging your skills and stamina, the reassuring brush of a hand on an arm, or an appreciative smile, are as rewarding as a passionate embrace is in it’s moment.

As we adapt to the lack of sleep and the movements of our new environment, we begin to appreciate the textures of the sea, its amazing blue color, and the aerobatics of seabirds.

Shearwaters wheel and swoop and skim through the troughs, turning dark and white in turns as they maneuver their backs or bellies towards us, hardly flapping. Masked boobies circle the boat with stiff wingbeats, turning their raccoon faces towards us. With a tern-like screech, the white-tailed tropic birds announce their visit, usually in pairs or threes. A thread of a tail trails their wide-bodied flight. They splay their comical black webbed feet to balance themselves in flight. They hover close to the rigging and look curiously down, black eye patches on a white head.

Stiff white torpedoes of flying fish flee Misty’s ponderous approach. Each morning we find several of them stiff on deck, misguided in the night.

We should cross the equator later this week and reach the Marquesas in late May. From there we begin exploring, by sail and kayak, some of the most remote areas of the planet that were originally settled by oceangoing canoe. Polynesia.