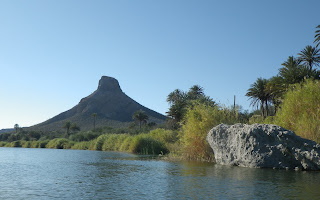 Four and a half hours after leaving Loreto and bumping along on a dirt road at 10ph through a dramatic landscape of volcanic debris and tenacious desert plants, we arrive at the edge of a precipice. Below us a few lights twinkle in a valley surrounded by mesas and peaks, and over all, the unique cone of El Pilon. The crescent moon and Venus shine above the last orange light of sunset.

San Isidro, one of the most remote settlements in the Baja peninsula, lies below us. Off we set again, the truck in front enveloped in its own dust and silhouetted beside the cacti.

San Isidro is an oasis in the mountains. Water flows from geologic faults forming fresh, cold lagoons. People have long tapped into that resource. Almost a century ago, the community created a low dam and an aqueduct that fed the fertile fields around the lagoons. Cultivating these fields and tending animals remains the way of life of the present inhabitants.

Almost every huerta has goats. Late January is the time for goats to be born, and the antics of the week-old babies provide hours of entertainment.

The sun rises and anoints the iconic peak of El Pilon which overlooks the better-known oasis village of La Purisima as well as San Isidro. Sunlight slides down El Pilon, gilds the tops of palms, and eventually filters down to the fields and orchards and a family of tent-campers preparing quesadillas on a folding camp table and a truck tailgate.

This is my business partner’s family. Ivette, Polo, and the girls Monse, 7, and Tita, 5, who are enthralled by the baby goats. Tita’s “Mountain Grandma” lets her into the pen with the babies. First she chases them and they go bounding away with their long silver ears flapping. Then Tita sits down and the goat kids come to play with her.

“Mountain Grandpa” in his white cowboy hat enjoys a cup of coffee with the family. His son Ramon is one of our interns at the Sea Kayak Baja Mexico center in Loreto. The youngest of 3, Ramon is about to graduate from the university where he studied Alternative Tourism.

The Mexican government grants land to communities who work that land, such as San Isidro. The government is now dividing that land into private sections. Community members decide which parcels they’d like, and do some swapping among themselves. Ramon’s parents have invited us up for our input on what sites would provide a good basecamp for visitors, tourists, or classes that Ramon will eventually host.

Even though I don’t understand everything he says, I know this is a heavy decision for him. He bends down and draws with his finger in the garden dirt to explain some possibilities. He takes Ramon, Ivette, and me on a walk across the street and through a neighbors huerta. They are burning some plant debris and the heat of the fire feels nice in the chill of morning. We jump across the aqueduct and suddenly enter desert. Cholla, palo adan, pitaya, barrel cactus. Rocky open spaces between. Up a hill we climb for a rewarding view. From here the little valley looks carpeted in palms. The lagoons run along the far side of the cultivation and reflect the green palms of the other bank. In the distance another lagoon reflects the blue sky. Over all stands El Pilon.

“I could trade for this,” says our grey-haired host. “Build a shelter, pump up water. A road can easily come up the side.” His eyes are clear and steady. It’s hard to guess his age. He is agile and fit with sun-weathered skin and the wisdom of time.

We pile into the front and back of a red pickup truck and visit another huerta that he owns. There is no view and we don’t like it as much as the one we’re camped at, which has access to the lagoon and goats to play with.

We rumble through town past adobe ruins, more goats, favas, palms, and people working in the fields. We leave town and climb a hill where the dirt road and the handmade aqueduct run side by side. We’re headed to the canyon, the source of the water.

The road descends sheer canyon walls. Red tailed hawks soar and cry out overhead. The road is mostly in the shade of the pale sandstone canyon wall, which makes the work of clearing rocks more pleasant. The truck follows us down carrying Polo and the girls.

The dam was made in the 1930s "on the backs of men and mules" says our host. He bends to clear plant debris from the intake grate of the aqueduct. The village came together to build this resource, with the help of government troops who had no wars to go fight. It’s been rebuilt after storms in the 1970s and 1980s, and is maintained by cooperative effort.

Below the dam Polo and the girls hop from rock to rock, playing at fishing with sticks they found. Across the canyon, grey basalt columns look like giant organ pipes carved out of the mountain wall.

A day hike up this canyon leads to the Ojo de Agua, or source spring. About an hour up is a band of marine sediment with fossils. It’s a journey we leave for another day.

On our way back we stop by Ramon’s uncle’s house, where the family processes the sugar cane into brown cones that resemble El Pilon’s peak each March. Once they have the sugar juice, they heat it over a fire of pitaya cactus ribs until it’s almost crystalized. Then it’s poured into molds carved of mesquite heartwood to harden. The process is an annual family gathering.

Beside the sugar processing equipment is a machine that warms my heart to see. An old truck has been converted into a mill for processing animal feed. Powered by the engine, the drive train turns the axle. Around the wheel rim is a belt, which animates the grinder. Ingenious!

Back at our camp after lunch, it’s time to clear the trail to the water. Cultivated fields and palm groves used to extend to the waters edge, along with a passable road, but hurricane Jimena replaced them with berms of sand and rock extending several hundred yards inland. Scrubby plants and some short palms have begun to grow. Around the waters edge bamboo-like carrizo makes a thick barrier. Ramon and his father clear it with machetes and we all roll rocks out of the trail so we can drag the kayaks on their little back wheel.

Ramon and I take the girls for a paddle up the lagoon. El Pilon peeks over the waving tops of the carrizo. Coots, a young cormorant, and several species of duck move aside as we glide past. Tita enjoys splashing her feet in the water while Ramon paddles. Monse hops out on a rock to have her photo taken. The strange combination of palms and cacti overlooks us from a hillside.

We pile again into the pickup truck to ride a couple miles to the legendary graveyard at La Purisima. According to the legend, a vampire was buried there in 1912 and is expected to rise again… We visit at sunset, with day’s last light on the tombs and piles of rocks painted white. Colorful artificial flowers decorate many of the tombs and rock piles. In the distance, El Pilon catches the sun’s final rays. No vampire appears tonight.

La Purisima was the site of a mission founded in 1720 that lasted in that site only 15 years. No ruins remain. From here the road is paved down towards the Pacific coast and the towns of Insurgentes and Constitution, and the junction with Hwy 1 which leads back to Loreto. It also connects with two towns on Madelena Bay: Lopez Mateos and San Carlos, both of which are hubs for whale watching in February.

Instead of taking the paved road back to civilization, we return the next morning down the washboard that we came up. There is a lesser rock art site along the way that we didn’t have time to visit on the way in.

We miss the turn, go back for it, then miss another turn, and I get one truck stuck in the rocks and sand of an arroyo. We dig and push, and finally get dragged out by a local rancher in a 4x4. Ivette, Polo, and the girls are too tired to complete the walk to the cave, so they head back to rest in the shade with other truck, which we left nearer the entrance because I feared we might get them both stuck.

Ramon and I trot to the cave to scout it for future trips and take photos. We arrive sweaty, panting, and smiling for the adventure of it. The cave paintings have suffered from graffiti, but include interesting creatures and patterns. The more subtle petroglyphs, carved into scattered rocks along the arroyo, are unmolested. They are mostly shapes of sea creatures.

We are in the process of putting together a 3 or more day guided visit to San Isidro with host Ramon and his family. Stay tuned to the Sea Kayak Baja Mexico website, or email info@seakayakbajamexico.com. May timeless cultures like this continue to be an inspiration and a source of essential wisdom for our future. May the impact of our visits be supportive and not destructive.
Posted by Ginni Callahan at Thursday, February 09, 2012