Shakedown, or How to Catch a Kayaker 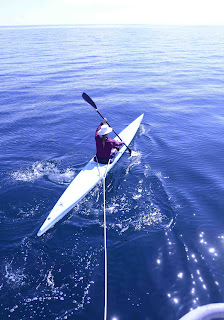 (written in late March)
We left Guaymas at sunset as a 2-day north wind began to mellow. I steered while Henrick saw to details of the rigging. Once we were out of the bay, the residual swell lifted and rocked the boat.

I guessed our speed by the passing bubbles. They moved slower than a normal kayaking pace. Two knots, I guessed. One point nine, said the GPS. We unfurled the genoa and Misty jumped ahead. Looking down, I guessed 4 knots, a good kayaking pace. Four point zero said the GPS. Yes! Our speed continued to climb, and we soon left my imaginary kayak far behind.

Little games fine-tune the senses. Refine awareness. For fun. For survival. To see what other areas of life the awareness might affect.

Hold this course, said Henrick, after we cleared the wide mouth of Guaymas Bay. Two-one-zero, said the compass when I shone my headlamp on it. Canopus, the star, hung just to the left of the mast, and Sirius higher up to the right, on average, since the mast swayed through them both. Every ten minutes or so I checked the compass, and it was consistently within 5 degrees of our course. Yes again!

Maybe these are skills so specific as to be useless in other settings. Like recognizing the grit of sandpaper by its face, or the grit last used on a kayak repair by the texture of the repair. But there is satisfaction in it anyway.

A fitful night’s sleep, fully dressed, in separate beds would be no cause for celebration on land, but out sailing, any sleep is a luxury. Henrick was catching a catnap when I awoke at 6am and saw it was light out. I tiptoed past his sea berth, avoiding the noisy hatch covers, and greeted an orange sunrise. A white moon hung gibbous and oval in the west. Flat horizon, only sea. Glorious sea! I tried on the view, and decided I could take a lot more of it.

As the rainbow of dawn colors in the west gave way to the sun’s light, I made out mountains in the distance. The Sierra la Giganta behind Loreto, some 60nm ahead. My heart sank. Despite their beauty and distance, they marred a perfect horizon.

“A good traveler has no plans and is not intent upon arriving,” says the Tao. Something about being underway before the wind seems eternal. Certainly timeless. Sailing satisfies the spirit’s urge to move.

Eighty-three nautical miles into a 128nm crossing, the decreasing wind reached nothing at all. Mainsail and genoa stretched on their tippy ties with arms spread wide to catch any breath that wafted, and harvested about a knot of speed from the air. Water barely rippled, so the fact that we moved at all attests to the marvel of engineering that is a sailboat.

The sleek blue surf ski on deck noticed the calm seas too. It begged to play. Under full sail, we dropped the ski overboard and I hopped in over the railing. I paddled in circles around the Island of Misty. Forty-five miles away, the mile-high Giganta mountains scratched the sky, but the rest of the horizon lay flat and pure. Besides the mountains, only Misty and the surf ski existed, and a few long-distance pelicans.

For fun, I connected a thick line from the bowsprit to my waist, and attempted to tow the boat. I dug the curved wing paddle into the water, and put the weight of my body behind it. The ski lifted with each stroke but flopped back down every time, tethered by the steel mass behind it. Henrick took a few photos, laughed, and said something about catching a kayaker.
Posted by Ginni Callahan at Tuesday, April 10, 2012

How to Catch a Sailor 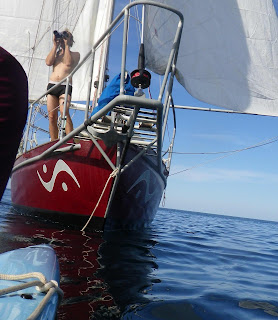