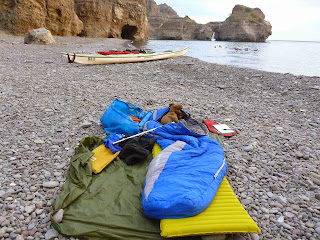 Exactly one hour after launching from Ligui beach, I am sitting on my sleeping bag at La Ventana beach on Danzante Island. Clouds hide the stars, but the gibbous moon shines through. Jupiter flirts with the sea, now reflecting brilliant, now shy.

I’m alone, except for Moose. Left Mom & Dad in cell block 2, cell number 2517a. They’re comfy in their luxury. I choose a pebble beach, the sleepy sound of waves on the shore, and the open sky. This is my luxury. This is where my heart lives.

I wake to watch the sunrise. Last night’s show at the “prison” was a rendition of Cats with people crawling around on stage in black tights with tails and ears. It was probably good exercise for them, and a way for the guests to pass the time while eating dinner. However, this morning is my kind of show.

Sunrise lights wispy clouds on fire over Monserrate and Santa Catalina Islands. I watch from my sleeping bag on the pebbles of Danzante. Add drama with some falling rocks tinkling down the cliffs behind. Syncopated music of the waves. I’ll join in on the flute when I’m done writing.

The changes are subtle but constant. The game is awareness. My pleasure this morning is to not be distracted from the game by making breakfast. Just being present with the sunrise. This is the sound of my cup filling.

This is the sound of flute music resonating off the canyon walls.

Does rock have a memory? Can their crystals reorganize like those in water based on the vibrations around them? Harmony or disharmony. This mini-amphitheater of rock and water and sharp desert plants has watched moments of drama and comedy of my life play out over the years. The stage hands know all. It has watched the pelican show. Again this morning: six, then nine, the one more, then dwindling again. Dive. Float. Flap flap, fold, and dive heavy again. Back and forth across the beach as a pack. 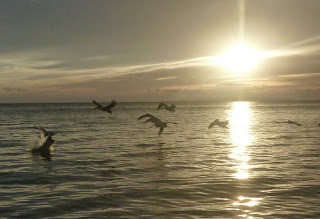 The wind line moves in, back out, then in again. A sailboat cruises by under a downwind genoa. Santa Catalina disappears into moisture and dust in the atmosphere, Monserrate almost goes too. Whitecaps peak up.

I lie here content after an exploration up the south canyon, up to the scree and the dike at the top, capped by a layer of loose cobbles. Cormorants glide by, beaks in the air. I should return to the prison and visit with my folks. I want to see them, just don’t want to leave. It’s been 2 and a half action-packed months of guiding back to back trips, and this is my first morning to lie here in the sunrise. 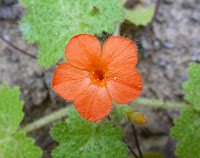 Just a few more breaths and I’ll load up the boat.

The desert after a rain, it's cliche. But here are some Baja plants and animals that don't mind! 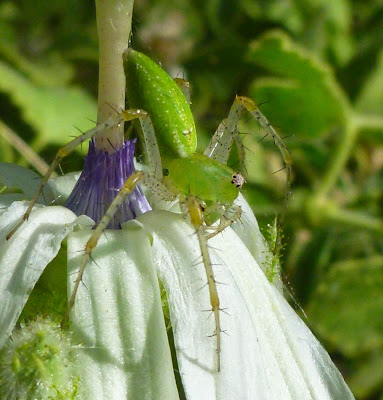 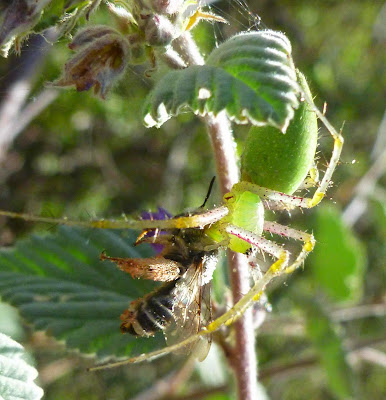 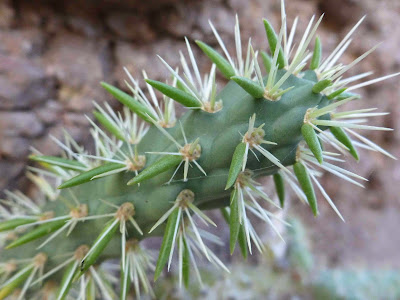 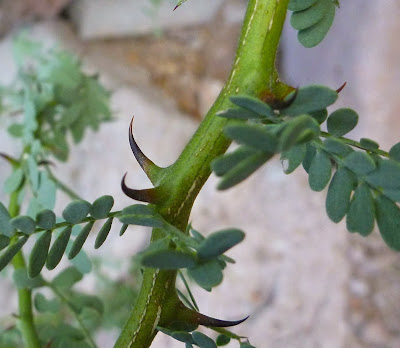 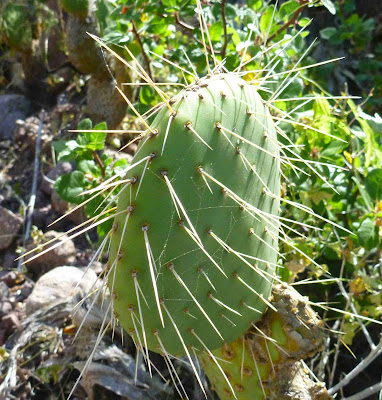 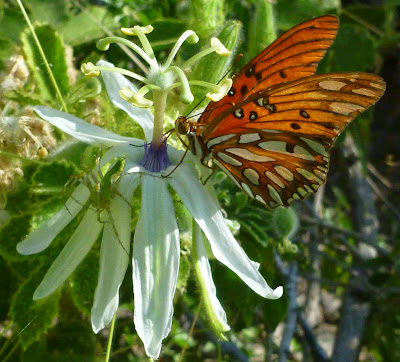 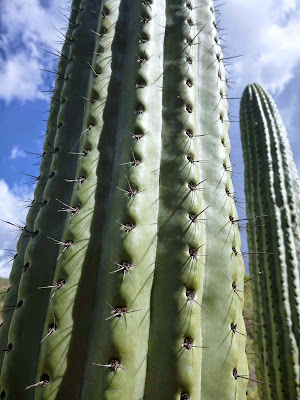 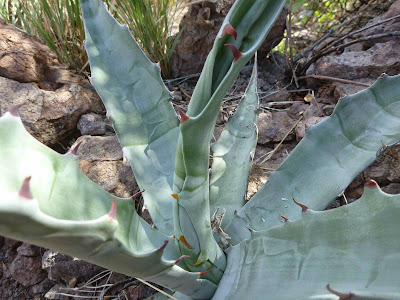 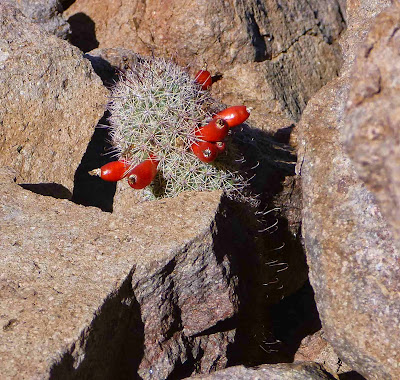 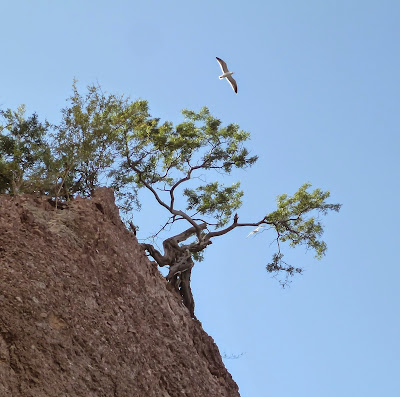 Trips have been keeping me busy this season. For Baja trip stories and photos please see the Sea Kayak Baja Mexico blog.
Posted by Ginni Callahan at Sunday, November 09, 2014

The Making of a Kayak Nerd 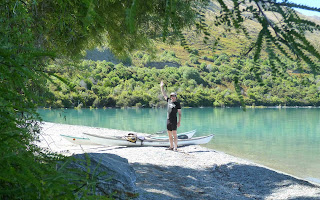 Early in our relationship I asked Henrick if he was into kayaking.

Enthusiast was how I translated that.

But he did get a Romany so we could explore island coastlines together on our sailing journey across the Pacific. On the rare occasion that he asked a kayak-related question, I had a 1-sentence opportunity to answer. But if I kept my mouth shut I could sometimes look over to see a perfect imitation of the bow rudder I’d just been using to play around the rocks, and I was content.

Paddling together in Patterson Inlet of Stewart Island, the southern bit of New Zealand, my favorite Swedish kayak un-nerd said something that about knocked me over. 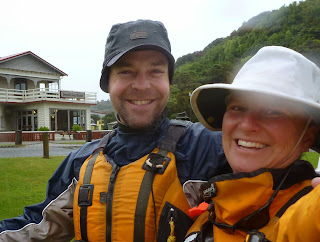 “I should get a kayak to have in Sweden.”

I enjoyed the sound of that for a moment before teasing him. “Be careful—you’re starting to sound a little nerdlike.”

Reviewing photos of our NZ trip, I can see the subtle beginnings of kayak nerd-dom. The headgear is the first sign. After a properly windy day, he switched from a baseball cap to something with a homemade strap. Then the cold, and he bought a snug cap with earflaps. 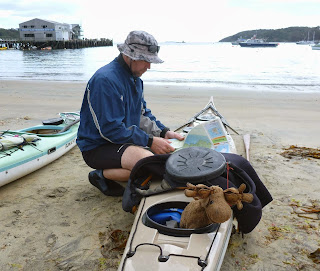 There’s the wearing of kayaking gear in public places. He’s been photographed wandering around small, uninhabited islands in kayaking gear. That’s the first step down a slippery slope. 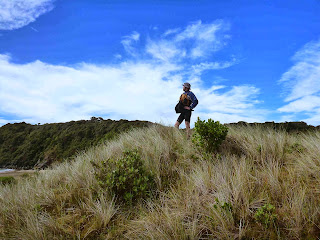 As the un-coach of my favorite kayak un-nerd, I’m impressed at the skills he’s acquiring and the conditions he’s willing to tackle with me. Pelting rain and katabatic winds down off the mountains in Milford Sound. 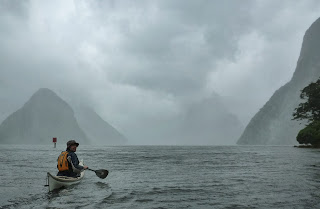 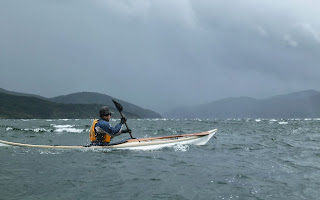 Shooting through tunnels on a swell. 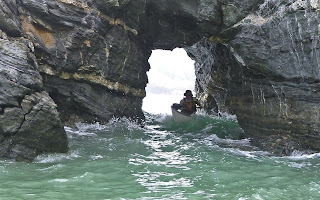 Playing in a little tide race in Marlborough Sound. 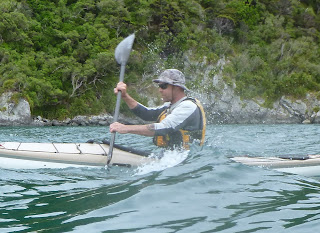 He even displays enthusiasm for heading out on the water. 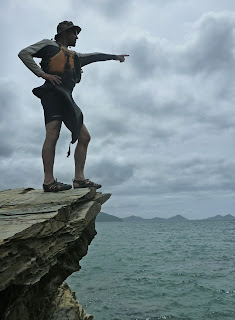 But the clincher was washing dishes at 12-Mile Delta outside Queenstown. We camped one site away from the spigot, but he carried the dishes the other direction to the lake to wash them. Like a good kayak nerd. 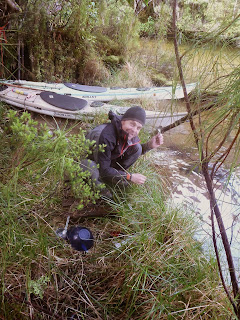 Milford Sound and a Little Wind 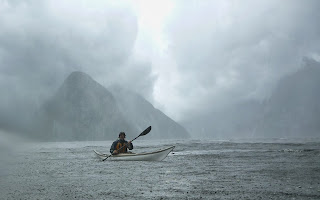 On the evening of the first day of 2014, Henrick and I shared a 495-piece puzzle of boats in a harbor with a pair of cousins from Nelson and Belgium. We finished just minutes before Gunns Camp shut the generator down and we all left the common hall for our respective dorms to sleep to the music of rain on the roof.

In the morning Henrick drove “Scooby Doo” the Subaru to Milford Sound and I shot photos out the rain-spotted windows. Over the pass, through the long, dark tunnel. Spectacular waterfalls tumbled down the sides of mountains. Snowfields played hide-and-seek with the clouds above us.

The Milford Sound Lodge was full for the coming night, but they did have the forecast: Severe gale warning with NW wind by late morning, and drenching rain. Following 2 days: NW gales and more rain.

At 11am the rain was still unmolested by the forecasted wind, so we launched our kayaks down a cobble bank by the car park and paddled past the cruise boat harbor. Bowen Falls blasted wind and billowed spray across our path. To Henrick I said, “I’ll try crossing it. You can learn from what happens to me and decide.” I edged into the blast and scooted across, eyes squinted tight against the pelting drops.

Mitre Peak, 1683 meters above the sea level of the Sound, was Henrick’s inspiration for wanting to come to Milford Sound. The shy mountain only disclosed its kneecaps this day, as swirling grey skirts and white petticoats veiled the rest. Cruise boats were still dwarfed by the mountain’s kneecaps.

We paddled along the north shore, some 40 meters out, along the flank of Cascade Peak (1209m), Water poured over grey rocks, through tenacious tufts of flax and ferns, between clumps of forest. Watching the vertical creeks tumbling down I thought it best not to paddle too close, lest the water loosen some rocks. I hadn’t yet verbalized the thought when we heard a shot and a crash. A big splash bloomed up in front of us against the shore. We didn’t have to discuss whether to stay offshore.

A peak rose triangular and steep between the main channel of the sound and Harrison Cove. “The Lion” shook greytone clouds about its head like a mane. Wind began to texture the Sound. Forty-five minutes into our paddle, we rafted up to share beef jerky and a sip of water. A German paddler in a red plastic sea kayak passed us on his way to the underwater observatory. I was sorely tempted to go there too. Or to get a closer look at the roaring waterfall at the end of Harrison Cove. Or to paddle 20km to the sea.

But there was the forecast. There was our simple preparation for just a short paddle. There was Henrick getting cold in wet gear when he wasn’t paddling to keep warm. Our margin for error was thin. Sometimes the wisest decision is the hardest. We turned back. Our first goal was already accomplished: paddle on Milford Sound. Only the second goal remained: return safely. We weren’t likely to see much different scenery if we went further. Just more vertical mountainsides tasseled with white cascades, as if they were draining the clouds directly into the Sound. More twisted trees, proud in their creative postures against the rain. More raindrops cratering the water. More wild clouds cavorting about the peaks. The mind can only take in so much drama and beauty at one time!

Ancient, craggy trees overhung grey rock along the water’s edge as we rejoined Milford Sound’s main channel. Wind-swell picked up, followed shortly by the wind itself. Tailwind with surfable ½ meter waves. Heavy rain dropped miniature cannon-balls into the metallic surface of the water, kicking up rings of splash and giving distant waves a white outline. I fell behind taking photos, then surfed a series of waves to catch up.

Less than half a mile from the car park, the wind saw us escaping and picked up for real. It plummeted straight off Cascade Peak to pick up whitecaps right at the shore and blow them across the Sound, trying to carry us away too. We angled into it, edged into it, and paddled with focus. Gusts lifted fat drops right off the surface of the water, somewhere around 25kts. It rained down, up, and sideways.

A bend in the shoreline gave us a momentary respite before crossing Bowen Falls’ blast zone again. We paddled into it together, Henrick on my left hip. I was too busy clinging to a wild bronco of a paddle to get a photo of Henrick emerging from the spray on the other side, but he looked dramatic. We admitted that we were not only wise to have turned back when we did, but a little lucky as well to have accomplished our second goal.

Off the water, we headed straight for the Milford Sound Lodge for a warm shower, hot drinks, and some food. A posted notice warned of the pending road closure due to hazardous weather: 100km gusts and more heavy rain expected. In the lodge parking lot a guy’s hat blew off and flew into the forest like a frightened bird. The forest danced, flinging colored leaves about like confetti. Camper van doors slammed open or shut of their own volition. Pedestrians walked hunched into the wind with hoods drawn tight as rain streaked sideways. People in the lounge sank into comfy couches, ordered hot coffee, and watched Mother Nature’s show.

We hit the road and blew all the way back to Invercargill a day early, but happy to rest and dry out.